Click To Enlarge
We are pouring the concrete foundation of the Gregorio residence remodeling project in Lake Balboa, CA. We utilized a high-fly ash content concrete as part of our commitment to make this remodel as “green” as possible.

Over half the electricity produced in the U.S. comes from coal-fired power plants. Fly ash is a byproduct of coal burning and can be substituted for more than half of the Portland cement typically used in a concrete mixture. Use of fly ash in concrete is beneficial to the environment in several ways:
1. It keeps the fly ash from entering the waste stream
2. It saves the energy ordinarily used to manufacture Portland cement
3. It needs 10% less water than traditional concrete

Because less water is used with high fly ash concrete, and because of the chemical reaction between the fly ash and lime which is given off in cement hydration, the end product is denser and stronger than traditional Portland cement-based concrete. Fly ash is made up of tiny, glassy beads; its physical composition creates a lubricating effect which enables the concrete to flow and pump better, filling the forms more completely. Additionally, high-fly ash concrete costs the same as or sometimes slightly less than traditional concrete. 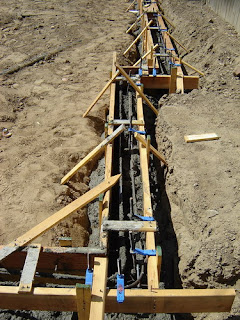 Click To Enlarge
According to Headwaters Resources, for every ton of cement manufactured about one ton of carbon dioxide is released. Replacing that ton of cement with fly ash saves enough electricity to power the average American home for 24 days, and reduces carbon dioxide emissions equal to two months’ use of an automobile.

Here’s a picture of producer R. J. Bain from Discovery Home’s “Green That House” program filming the pour – they’ve been tracking the progress and filming various “green” elements as the remodel moves forward.